The NCSHOF will continue to expand and strengthen our association with all citizens of North Carolina, especially the youth, through popular exhibits and educational displays.

Artifacts of many of the N.C. Sports Hall of Fame members, along with a recognition of notable accomplishment, are showcased in a 3,000-square foot museum on the third floor of the N.C. Museum of History in Raleigh. The museum’s address is 5 East Edenton Street, and it is open from 9 a.m. to 5 p.m. Monday through Saturday and noon to 5 p.m. on Sunday. Admission is free.

History of the Hall 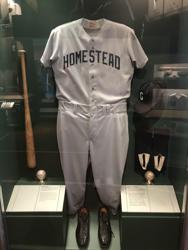 The North Carolina Sports Hall of Fame’s beginnings date to 1962. While formation of a Hall had been talked about for years, it wasn’t until the Sports Award Committee of the Charlotte Chamber of Commerce did something about it that the idea took hold.

A Queen City businessman, Jack Wood, and an attorney, Lloyd Caudle, are credited with leading the efforts. The first recorded meeting was Feb. 8, 1963, when a constitution was adopted and the inaugural class of inductees – Jim Beatty, Wes Ferrell, Charlie “Choo Choo” Justice, Ace Parker and Estelle Lawson Page – was elected. That December, the first induction banquet was held in Charlotte.

From the beginning there was a desire to house a permanent home for the Hall and the memorabilia that would be acquired through the years. In 1969, the original Charlotte Coliseum, at the time one of the showplace arenas in the Southeast, agreed to display the mementos in trophy cases in the corridor of the building, with the hope that expansion of the building would include a Hall of Fame Room. Unfortunately, support for the expansion waned, and the memorabilia was transferred to the North Carolina Museum of History in Raleigh, which already was overcrowded and could offer only a limited exhibition.

In February of 1982, a two-year Hall of Fame exhibit was opened at the museum. Increased attendance at the museum proved the effort to be successful. The Hall decided it would await the outcome of hoped-for-expansion of the museum before locating elsewhere. The North Carolina General Assembly responded, approving the construction of a new museum and allotting approximately 4,000 square feet of space for a permanent Hall exhibit, which opened in 1992.

Recent years have seen the Hall expand its presence and profile, and the NCSHOF area remains one of the Museum’s most popular attractions.  The displays themselves have undergone several updates, and the annual induction banquet also found a larger venue at the Raleigh Convention Center. Additional offerings like the Great Moments in North Carolina Sports recognition and the Don Fish Legacy Award provide increased opportunities to highlight key moments and figures connected to athletics.

The addition of our Student-Athlete Program, dating back to 2016, has provided an opportunity for hundreds of middle and high school student-athletes and chaperones to attend NCSHOF Induction events to engage, inspire, and support their development, including a special seminar where they hear directly from NCSHOF members.  Virtual components have also enabled this to have even broader reach.

But through it all, the North Carolina Sports Hall of Fame has remained true to its mission— to celebrate extraordinary athletic achievement and leadership.

Our State, from Elizabeth "For the Win"