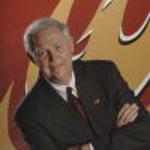 A three-sport All-County performer at Elm City High School in Wilson County, White made his mark in the sport of six-man football. The four-year starter in football, basketball and baseball amassed over 160 consecutive starts in the three sports combined during his prep career.

A two-time All-State football player, White accepted a scholarship offer from Wake Forest College. Listed fifth on the depth chart upon his arrival at Wake Forest, he promptly earned the starting job at the halfback position in time for the first game of his freshman season.

White led the Atlantic Coast Conference in rushing as a senior, averaging over six yards per carry for his final college campaign. The All-ACC halfback and Academic All-American finished as runner-up to eventual NFL MVP Roman Gabriel for 1961 ACC Player of the Year honors. White was also invited to play in the annual Blue-Gray All-Star game held in Montgomery, Ala.

After graduating from Wake Forest in 1962, White was extended the opportunity to play for the Edmonton Eskimos of the Canadian Football League. A twice-broken collarbone during his initial season with the Eskimos ended his playing career. White remains one of just a handful of football players to have participated in the six-man, 11-man and 12-man game.

In 1964, White received his master’s degree from the University of North Carolina (Chapel Hill) and became an assistant football coach at Elon. In 1967, he relocated to Mississippi State University to earn his Ed.D degree. While there, he served as an assistant football coach until returning to Elon in 1974 for the remainder of his professional career. Upon his return, White served as an assistant professor and later as chair of the physical education department. He was named Elon’s 19th Director of Athletics in 1979.

As Director of Athletics, White led Elon through its evolution as an NAIA institution through NCAA Division II status to its current NCAA Division I affiliation with the Southern Conference. During his tenure, Elon claimed four national championships, 12 conference all-sports trophies and 56 league titles while producing well over 500 all-conference performers and countless academically recognized student-athletes.

White directed a major renovation of Elon’s athletics facilities, building a complex that is the envy of schools across the nation. His hard work and leadership led to the design and construction of Rhodes Stadium (football), Irwin Belk Track, Latham Park (baseball), Jimmy Powell Tennis Center, Rudd Field (soccer) and Koury Field House and the full renovation and expansion of Koury Center. Rhodes Stadium was designated a 2003 Facility of Merit by Athletic Business.

In 2002, the field at Irwin Belk Track in Elon’s athletics complex was named in honor of White and his wife, Norma, by their good friends Jerry and Jeanne Robertson, who made a major gift to fund construction of the field. Named in 2006, the Alan J. White Bell Tower stands at the center of athletic facilities that were constructed during White’s tenure at Elon.

Under White’s guidance, the Phoenix entered competition in the prestigious Southern Conference in 2003. In 2006, the men’s basketball team captured the league’s North Division championship, the men’s tennis squad claimed a share of the conference’s regular-season crown and the baseball team won the league’s outright regular-season title to give Elon three SoCon trophies during White’s last three months on the job.

Active in the local community, White has served as president and board member of Alamance Rotary Club, been on the board of directors for the Alamance County YMCA and served 12 years on the Alamance County Parks and Recreation Board of Commissioners. He was also a general member of the Sports Development Council (a division of the Burlington/Alamance Convention and Visitor’s Bureau) as well as a sub-committee member of the Awards Committee of the Sports Development Council.

White currently serves on the Alamance Regional Medical Center Board. The Whites have one son, Kyle and two grandsons, Tyler and Bryson.