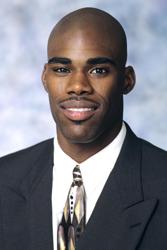 Antawn Jamison played forward at the University of North Carolina from 1995-98, winning National Player of the Year honors in 1998 from the Associated Press, the United States Basketball Writers Association, the National Association of Basketball Coaches, The Sporting News and the Naismith and Wooden Awards.

Jamison was born in Shreveport, La., but moved to Charlotte and attended Providence High School. He was a first-team all-state selection, The Charlotte Observer named him Mr. Basketball, the Greensboro News and Record named him the North Carolina Player of the Year, and he was a McDonald’s All-America.

At Carolina, Jamison became the first player in Atlantic Coast Conference history to earn first-team All-ACC honors as a freshman, sophomore and junior. He shot 62.4 percent from the floor as a freshman, becoming the first rookie to lead the ACC in field goal accuracy.
As a junior, he became the second Tar Heel (with Lennie Rosenbluth) and third player to win ACC Player of the Year, ACC Tournament MVP, NCAA Regional MVP and National Player of the Year honors in the same season. He also was the ACC’s Male Athlete of the Year for all sports. He was later named to the ACC’s 50th Anniversary Team.

Jamison scored 822 points in 1998, the second-highest single-season figure in Carolina history, and pulled down a school-record 389 rebounds. He averaged 22.2 points and 10.5 rebounds, averaging the first double-double by a Tar Heel since Mitch Kupchak 22 years earlier.

The 6-foot-9 forward led Carolina to ACC Tournament titles and Final Four berths in both 1997 and 1998. He starred on Dean Smith’s final team as head coach and Bill Guthridge’s first.

Jamison scored 1,974 points (19.0 per game) and grabbed 1,027 rebounds (9.9) in 104 games as a Tar Heel. He is currently eighth in career scoring and fifth in rebounds in school history. He had 51 double-doubles, second only to Naismith Hall of Famer Billy Cunningham.

Jamison played some of his best games against Duke, averaging 30.3 points and 12.0 rebounds in three home wins over the Blue Devils, and posting 22 points and 18 rebounds versus Duke in the 1998 ACC Tournament championship game.

He was the fourth pick overall in the first round of the 1998 NBA draft and played with six NBA teams (Golden State, Dallas, Washington, Cleveland, Los Angeles Lakers and the Los Angeles Clippers). Jamison scored 20,042 points, the third-most by a Tar Heel in NBA history, trailing only Michael Jordan and Vince Carter. His 8,157 rebounds are the most ever by a Tar Heel in the NBA. He made 1,163 three-pointers.