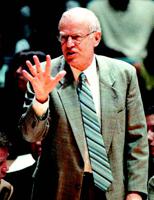 Bill Guthridge’s final game as head basketball coach of the University of North Carolina at Chapel Hill was in the 2000 national semifinals, capping a remarkable career in which he played or coached in 14 Final Fours, more than anyone in NCAA men’s basketball history.

The Parsons, Kansas, native also led UNC to the Final Four in 1998 in his first season as head coach, was part of 10 Final Fours as a Tar Heel assistant, and one each as a player and assistant coach at his alma mater, Kansas State.

Guthridge was Dean Smith’s assistant for 30 years. He came to UNC in 1967 after five years as Tex Winter’s assistant in Manhattan. In 33 seasons, the Tar Heels won two NCAA championships (1982 and 1993), played in 12 Final Fours, won 13 ACC Tournaments and played in the ACC championship game 22 times. The Tar Heels appeared in 29 NCAA Tournaments, winning 71 games, and won the 1971 NIT.

He was on the sidelines as a head or assistant coach for 960 victories, including 867 at North Carolina and 93 at Kansas State.

Guthridge went 80-28 in three seasons as the Tar Heels’ head coach. He won more games than any college coach after one and two seasons and tied the NCAA record for most victories after three years.

The National Association of Basketball Coaches, CBS, Sporting News and Atlanta Tipoff Club named him the National Coach of the Year in 1997-98. That year, UNC won 34 games, ACC Tournament and NCAA East Regional titles and he was also named ACC Coach of the Year.

“Bill did a marvelous job, but it was not a surprise to me or anyone who knows college basketball,” said Dean Smith. “He never did receive enough credit, although he didn’t ask for it, for all his years as Tex Winters’ assistant and my assistant. Bill’s basketball savvy, ability to remain composed and his genuine affection for his players are just some of the reasons for his success as a head coach.”

For many years Guthridge was part of a UNC coaching staff that included Smith, Roy Williams and Eddie Fogler. As head coach, he was assisted by Ford, Dave Hanners and Pat Sullivan.

Guthridge and Georgetown’s John Thompson were assistants under Dean Smith in 1976 when the United States won the Olympic gold medal in Montreal.

He and his wife, Leesie, have two sons, James and Stuart, and a daughter, Megan.

In 1993, he and Leesie created the William W. and Elise P. Guthridge Library Fund, which enabled the House Undergraduate Library to purchase much-needed humanities materials. They also helped fund the Undergraduate Library renovation campaign in 1998. A multi-media classroom on the library’s upper floor is named in recognition of their support.

In 1998, the Bill Guthridge Distinguished Professorship in Mathematics was established at Carolina. He majored in math at Kansas State.

Guthridge, who played scholastically for Harold Johnson, was inducted in the Kansas Basketball Hall of Fame in 1994 and the Kansas Sports Hall of Fame in 2005. He is also the recipient of a Distinguished Service Medal from the UNC General Alumni Association.

In 2007, the Carolina Locker Room was dedicated by the basketball lettermen in his honor. He died in May 2015.