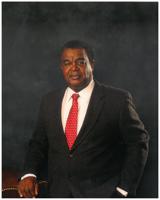 William Louis (Bill) Hayes Sr. was born and raised in Durham, where he had a stellar high school career as a tackle at Hillside High School. He went on to play four seasons as both a center and linebacker at North Carolina College, now known as North Carolina Central University. While attending NCCU, Hayes earned All-America honors on three occasions before graduating with a degree in physical education in 1965.

Bill then embarked on a coaching career that would span more than four decades. It began as an assistant in the high school ranks in both Virginia and North Carolina, including his alma mater, Hillside High.

In 1973, he accepted his first job on the college level, at Wake Forest coaching offensive backs, and in so doing became the first African American coach in the Atlantic Coast Conference. During his time at Wake Forest, Bill completed his master’s in physical education at North Carolina A&T.

After three years at Wake, he was named head coach at Winston-Salem State. During Bill’s tenure at WSSU from 1976-87, the Rams won three CIAA championships (1977, 1978 and 1987) and seven division championships. Twice – in 1977 and 1978 – the Rams completed undefeated regular seasons.

In 1988, Bill moved on to become the head coach at North Carolina A&T, where he amassed a total of three MEAC titles, the 1999 Sheridan Broadcasting Network black national championship, two NCAA Division I-AA playoff appearances and an overall record of 106-64-0 in 15 seasons. Overall, in 27 years as a head coach, Bill’s record was 195-104-2. He’s the winningest coach in both WSSU and N.C. A&T history.

Bill made a career shift in 2003 and assumed the reigns of athletics director at his alma mater, NCCU. Under his leadership, the $1,000 Eagles Campaign was the most productive fundraising campaign of any historically black colleges and universities athletics program. Additionally, he guided the athletic program to its most successful season (2005-06) in NCCU school history with four conference titles and four NCAA championship team qualifiers. He twice was recognized as the CIAA’s top administrator.

In 2007, he accepted an offer as the top athletics administrator at Florida A&M. During his stint at FAMU, Bill was instrumental in the development of the school’s $40 million basketball arena and guided the athletics program to three MEAC conference titles.

Missing the Piedmont, Bill answered the call to become Winston-Salem State’s athletics director in 2010. Under his tutelage, WSSU produced 11 conference championships during his first two years, as well as the successful reinstatement of the baseball program.