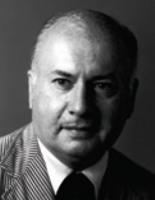 Bob Quincy was born in Panther, West Virginia. His mother was a teacher, his father a doctor. By the time Bob was 13, his parents realized that their tiny town could not provide the education that their only child needed. So Quincy was sent to Oak Ridge Military Academy near Kernersville, where he was the school’s youngest student. He thrived in academics and sports, and he loved North Carolina, leaving it only briefly for military service. By the time he had graduated from high school, he had earned a basketball scholarship to UNC.

World War II interrupted Quincy’s education. He said that there were a few term papers staring him in the face, and he thought it might be a good idea to do the patriotic thing and go down to the recruiting office on Franklin Street. Rising to lieutenant in the Army Air Corps, Quincy flew 30 missions with the 8th Air Force over Germany toward the end of the war, then returned to Chapel Hill to finish his education.

With a journalism degree and a strong ability to paint pictures with words, he had no trouble landing a job with the Rocky Mount Telegraph. A few years later he was hired at the Charlotte News, eventually becoming sports editor and assembling one of the finest group of sports writers the Queen City would ever see. Furman Bisher and Sandy Grady were in his department, and Charles Kuralt was in the newsroom. Quincy’s quest for perfection occasionally frustrated him to the point of explosion. Stories of him throwing typewriters out of the second floor window were legendary, until the editor, Brodie Griffith, put a stop to it, saying someone on the sidewalk was going to get killed.

In 1962, Quincy took a job at his alma mater as sports information director. Four years later, WBTV, the CBS affiliate in Charlotte, convinced him to become its sports editor. Not really liking being in front of a camera, he found a better fit in radio and moved to Big WAYS as sports director. In 1971, the Charlotte Observer offered Quincy a job as daily sports columnist, and he returned to his first love, print journalism. He continued to do his morning sports show on WAYS and was with both companies until his death.

Affectionately known as “Coach” to friends and colleagues, Quincy’s trademarks in his writing were fairness and accuracy. If he were told some information “off the record,” it would stay that way, until the go-ahead was given to publish. His writing reflected a vast knowledge

of sports and athletes with an encyclopedic memory for facts. He rarely ever took notes in an interview, but without fail got the quotes correct. Much of his writing was filled with humor so that the reader could picture himself there and laugh out loud at the situation. As funny in conversation as he was on the printed page, Quincy sometimes joked about himself but never put other people down. Asked one time about Dean Smith picking him as a golf partner in a charity match, Quincy said it was kind of like Hitler choosing Mussolini as an ally.

Honors, accolades, and awards were abundant for Quincy. Five times he was named National Sportswriter of the Year for North Carolina. He was inducted into the N.C. Boxing Hall of Fame for his work with Golden Gloves. In 1980, he was chosen Sportsman of the Year by the Charlotte Sportsman Club, which later renamed the honor the Bob Quincy Award after his death. In the last days of his life, his friend, Dean Smith, came by his home to present him with the Precious Gem Award from UNC. In 2005, he was posthumously inducted into the UNC School of Journalism Hall of Fame.

Quincy authored two books. Choo Choo chronicled the life and talents of football great Charlie Justice – the two had been friends since their college days together in Chapel Hill. The other title, They Made the Bell Tower Chime, was a composite of sketches about UNC athletes. After his death, the Bob Quincy Scholarship was created in the UNC School of Journalism.

In 1984, Quincy lost a two-year long battle with cancer. He showed the same dignity in his last days as he had throughout his life, always being considerate of those around him. He is remembered as one of North Carolina’s greatest sports writers and a gentleman to all who knew him. Bob was survived by his wife, Kathleen, and six children.