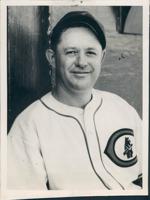 Frank Spruill “Jake” or “Jakie” May grew up in Wendell, where he joined the town’s baseball club in 1912 at the age of 17. He also played for several years at Oak Ridge Institute under famed coach Earl Holt, and at 19 Jakie joined the Newnan Georgia ballclub.

In 1917, he signed with the St. Louis Cardinals. Jakie was known for his fastball and a perplexing jug-handled curve ball. He threw a no-hitter in an off-season stint in Cuba, and in 1922 while pitching for the Vernon Tigers of the near-major Pacific Coast League, he won the pitching crown with a still unbroken 35-9 record and a 1.84 earned run average. After that season, the New York Yankees, who had recently bought Babe Ruth’s contract for $100,000, offered $75,000 for Jakie’s services; the Tigers refused to sell. Then during World War I, Jakie enlisted and was assigned to an Army traveling baseball team that entertained the troops throughout the war.

In 1922, Jakie joined the Cincinnati Reds and enjoyed one of his best major-league seasons. He finished the year with a 3.00 earned run average and led the National League in both saves and games finished. His Reds’ career included seven years as starter and reliever and three seasons with between 10 and 15 wins.

Then in 1931, the Chicago Cubs signed Jakie, whom the media had now affectionately dubbed “The Wee Carolinian” due to his slight 5-foot-8 frame. Led by future legends Rogers Hornsby, Gabby Hartnett, Hack Wilson and Kiki Cuyler, the Cubs had pennant aspirations and wanted Jakie to help bolster their bullpen. He did just that and, in fact, closed his career by recording back-to-back strikeouts in games against the great Babe Ruth during the 1932 World Series where the stronger Yankees defeated the Cubs.

In 14 years in the majors, Jakie pitched more than 1,500 innings with a 3.88 earned run average and a 3.59 Fielding Independent Pitching (FIP) rating, where the influence of supporting defensive players with varying degrees of talent is eliminated. He also recorded 761 strikeouts, an amazingly high number for his era when strikeouts were infrequent. Statisticians now make comparisons across the years by using the Fully Normalized Strikeout Rate, which compares the strikeout rate of a pitcher to the league average of his day, thus leveling the playing field. Using this metric, Jakie ranks among the top 25 strikeout artists of all time.

After he retired, Jakie returned with his family to his beloved Wendell, where he farmed, hunted, fished, and remained active in civic life until his death in 1970. Today, the town’s main baseball field and a street both bear his name and, in 2017, 100 years after his professional debut, about 600 youth and coaches marked the beginning of the baseball season as “Jake May Opening Day.” Jakie represents a main goal of sports in that he is still known and respected first and daily for his citizenship and character, but never forgotten for the glory days of his athletic career.