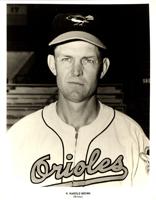 Greensboro native Hector Harold Brown was expected by his parents to be called Hal, but he quickly earned the nickname of Skinny – because he wasn’t. “I was fat as a baby,” he explained one time, “and being in a southern town and one of eight children, you know, everybody had to have a nickname.”

He grew up to be 6-foot-2 and 180 pounds, a quiet, modest man with dark, curly hair who pitched in the major leagues from 1951-64 and was a teammate to hall of famers the likes of Ted Williams, Brooks Robinson, Hoyt Wilhelm and Mickey Mantle. He died in December 2015, six days after celebrating his 91st birthday.

At Greensboro Senior High School, Skinny excelled in basketball, football, and baseball. The latter was his best sport as he was named the school’s Most Valuable Player in 1941. After graduation, he signed with the Boston Red Sox, who then sent him to attend UNC. His collegiate career was interrupted by World War II, where he served in the Army Air Corps as a gunner on a B17. He flew combat missions and was shot down twice, once landing in the English Channel.

After his return from the war, Skinny signed with the Red Sox and played in the minor leagues until he was brought to the majors in 1951 as a member of the White Sox. His big-league career included stints with the White Sox, Red Sox, Orioles (eight years), Yankees and finally the expansion Houston Colt .45s. An excellent athlete, he was occasionally used as a pinch-runner and was one of the best-hitting pitchers for several years. He even played one inning at third base for the Orioles.

Skinny had his best years in his 30s after he learned to control the knuckleball, his most effective pitch. He threw a one-hitter for Baltimore against the Yankees in a pennant race late in the 1960 season, allowing only a Mickey Mantle home run. He finished the year with a 12-5 record and a 3.06 earned run average. A year later, the Orioles won 95 games and Skinny was the star of the summer, at one point throwing 36 consecutive scoreless innings as both a starter and in relief – a franchise record that stands today – posting three shutouts along the way.

In 1964, at the end of his playing career, he had several coaching offers, but chose to return home to his family and business in Greensboro. Besides perfecting his golf game, Skinny and his wife, Maxine, raised two daughters, Suzanne and Lisa. In 1991, he was elected to the Orioles’ Hall of Fame. “I consider it quite an honor,” an always humble Skinny said at the time. “It’s something I didn’t expect.”