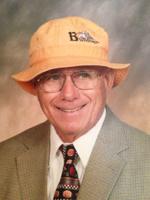 Jack Ray Holley was born Aug. 15, 1938, in Pender County in a small community called Ashton Crossroads. He was the youngest of three children born to William “Harvey” Holley and Doris Pershake Holley. Due to his father's battle with alcoholism, Jack moved around a lot with his mother, living with relatives in Wilmington and in Miami, Fla., then back to Wilmington.

He formed a close bond with his junior high school and high school coaches – men that would become role models and mentors to him: Billy Mason, Al Black, Wimpy Johnson, Leon Brogden, Jap Davis, Bill Brooks, Buck Hardee and Calvin Lane. Jack always remembered fondly how his mother never missed his games. When he was asked by his children about his dad coming to watch him play sports, he said, “My daddy didn't really understand sports and always thought I should be working. He never came to any ballgames, except one of my football games at New Hanover. After the game, when I went home, he was up waiting for me. I asked him what he thought. He said, ‘Son, I'd beat the hell out of somebody if they hit me like that!’ That was his first and last game.”

Jack excelled as a three-sport athlete at New Hanover High School, graduating in 1957. He played on four state championship teams in football and basketball and one state runner-up team in baseball. After a less-than-stellar first year academically at Guilford College, he enlisted in the U.S. Army, where he served for two years. After being honorably discharged, he returned to Guilford as a three-sport student athlete. He would be inducted into its hall of fame in 1998.

While at Guilford, he met and would go on to marry Judy Wells, a cheerleader for the Quakers. After graduating in 1963, Jack began his first teaching and coaching assignment at Carolina Military Academy in Maxton, where he was an assistant football coach to head coach Clyde Parrish. Jack's first head coaching job was at Tabor City High School in 1964, and his passion for coaching and teaching took him to stints at Hallsboro High School, Wallace-Rose Hill, West Columbus, South Columbus, and Harrells Christian Academy.

In all, Jack coached for 49 years, all but six as a head coach. His teams, known for their quickness and strength though not always their size, won 412 games. He was inducted into the Greater Wilmington Sports Hall of Fame in 2007 and the North Carolina High School Athletic Association Hall of Fame posthumously in 2014; he had passed away in May 2013 at his home in Wallace. Surviving are Judy, three children (Julianne, Jemma and Battle), nine grandchildren and three great-grandchildren.

He always believed in leaving a program better than the way he found it. He enjoyed every minute of teaching and coaching. In an interview late in his career, he said, “I wasn't trying to be funny, but I said my favorite time going to school was recess. Coaching to me has just been an extension of recess for 44 years.”