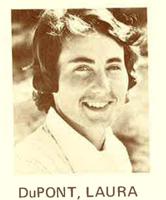 Laura DuPont is arguably the greatest female tennis player in North Carolina history, and she did it all on her own before Title IX and before women’s tennis received its rightful recognition.

Laura went on to star in both sports at UNC Chapel Hill. In 1970, she won the women’s collegiate national championships, the first women’s national title ever for the Tar Heels – she also was the school’s first female All-America honoree. In 1971, Laura was ranked No. 1 in the South, and that year she reached the quarterfinals of the U.S. Open. She also led the women’s basketball team in scoring in her two seasons in Chapel Hill.

After graduating in 1972, Laura competed professionally from 1972 to 1984, at one time being ranked as high as No. 9 in the country. Among her career highlights, she won both the U.S. Clay National Championships and the German Open in 1977, the Canadian Open in 1979 and the U.S. Open 35 and over singles title in 1984.

Her career spanned the formative years for the Women’s Tennis Association (WTA) – for 10 years, she was elected by her peers to lead as an officer and board member. “Laura was an athlete and a woman who knew how to win on and off the court, and she embodied everything the founders of women’s professional tennis envisioned when we started our movement in 1970,” said Billie Jean King.

Added Pam Shriver: “Laura and I first teamed up in doubles in the late ’70s when I was a newcomer on the WTA Tour and she was an experienced veteran. We won tournaments, played against the best in the world and even qualified for the Tour Championships. She was the opposite of a self-promoter – just a hard-working lover of tennis.”

Laura died on Feb. 20, 2002, of cancer, at the age of 52, but her legacy of achievement lives on. “Laura’s lifetime career record speaks for itself, but what you won’t find in the record books is all that Laura did off the court,” said Peachy Kellmeyer, who has overseen WTA operations for more than four decades. “She was the consummate role model, sacrificing much of her time and resources to improve and advance women’s tennis and its players.”