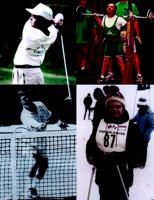 The incredible story of Marty Sheets began in 1953. Born prematurely, he spent his first 15 days in an incubator. Later, tests concluded that he had Down syndrome, which would limit his abilities. His parents, David and Iris Sheets, always emphasized good social skills and encouraged Marty to do his best. As a child, Sheets enjoyed playing in the back yard, swimming at the neighborhood pool and waterskiing at the lake. He attended special education classes in the Greensboro Public Schools and wrestled at Lindley Junior High. At Smith High School, he participated in a distributive education program, which led to a 38-year career with a local department store.

When Sheets was 15, the Kennedy Foundation provided the Greensboro Parks and Recreation Department with funds to develop recreational activities for intellectually challenged children. He excelled in swimming, and in 1968 he and four other athletes were selected to represent North Carolina and the USA in the first International Special Olympics competition. An illness prevented Sheets from competing, but at the post-event banquet he was personally awarded a Special Olympics Gold Medal by the group’s founder, Eunice Kennedy Shriver. That was the beginning of a long association with Special Olympics and a lasting friendship with the Shriver family that changed his life forever.

Over the years, Sheets became a highly decorated Special Olympics athlete, winning 250 medals – including seven in World Games – competing in golf, power lifting, swimming, tennis skills and skiing. While competing, he met many celebrities. When the Special Olympics introduced its winter competition in 1977, Sheets traveled to Steamboat Springs, Colorado, to compete in skiing. He won a pair of bronze medals and had a chance to ski with the legendary Billy Kidd. In 1987, he joined singer John Denver in leading the USA delegation into Notre Dame Stadium for the opening ceremonies of the 1987 International Special Olympics.

While there, Sheets won a gold medal in tennis skills competition and even had the chance to play with Arthur Ashe. At the 1991 World Games held in Minneapolis, Sheets won two bronze medals in powerlifting, met boxer Evander Holyfield and was featured on ABC’s “Wide World of Sports.” He and his parents were invited to join President Bill Clinton and his wife Hillary during Opening Ceremonies of the Special Olympics World Games in 1995 at Yale University.

Sheets frequently spoke at events when Raleigh was chosen to host the 1999 Special Olympics World Games. He appeared on stage with basketball star Grant Hill during the opening ceremonies. He competed in powerlifting and won a bronze medal in the bench press competition. Golf was Marty’s favorite sport. During the Special Olympics North Carolina golf competitions he won the gold medal several times. In 2007, he won a gold medal in his flight at the Special Olympics National Invitational Tournament held at Port St. Lucie in Florida. And he once played golf with Gary Player during a fundraiser for Special Olympics.

But those accomplishments and achievements are only part of his remarkable story. As a member of the Special Olympics North America Golf Committee, Sheets traveled all over the country attending events, recruiting volunteers, and representing the Special Olympics cause. His example and service to the community have been an inspiration to many. He was selected by the Olympics Committee as one of its “community heroes” to serve as an official torch-bearer when the Olympic torch passed through Greensboro prior to the 1996 Olympic Games held in Atlanta. Among his many service honors received are The Order of the Long Leaf Pine award presented to him by Governor Jim Hunt in 2000, and the Distinguished Citizen Award from the N.C. Employment Network of the Division of Vocational Rehabilitation Services. His long volunteer service to the Wyndham Championship golf tournament was recognized when he won the national Volunteer of the Year Award from the PGA Tour in 2006. A member of the Presbyterian Church of the Covenant, Sheets was ordained an honorary elder in 2007, and a room in the church was remodeled and named “Marty’s Room” in his honor. He died in May 2015.