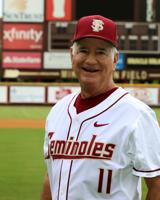 Charlotte native Mike Martin this spring embarked his 39th year as Florida State’s head baseball coach and has continued to redefine success by any standard of measure. With 1,944 career victories coming into the season, a .737 winning percentage that sits atop all active NCAA Division I coaches, 38 consecutive regional tournament appearances and 16 trips to the College World Series, Mike’s place in college baseball history is secure.

He was inducted into the American Baseball Coaches Association Hall of Fame in 2007. Since then he has eclipsed the 1,500-, 1,600-, 1,700-, 1,800- and 1,900-win milestones, returned to the College World Series four times in the last decade (including in 2017) and has shown no sign of slowing down, while continuing to turn out All-Americas, major-league draft choices and postseason participants. Remarkably, he has been associated with the Seminoles for 46 of the program’s 71 seasons – as a player, assistant coach and head coach.

With Mike at the helm since 1980, the Seminoles have won 18 conference championships – 11 of those in the Metro Conference and the last seven in the Atlantic Coast Conference. Since moving to divisional play in 2006, he has led the Seminoles to at least a share of the ACC Atlantic Division title eight times (2007-14). FSU has played in the conference title game in six of the last nine years.

Quite naturally, Mike’s accomplishments have been recognized regionally and national, as he has claimed conference Coach of the Year honors 13 times; six times in the Metro Conference and seven times in the ACC with his latest such honor coming in 2012. In all through the years, his Seminoles have collected 91 All-America and 130 All-ACC honors. Furthermore, amazingly he has coached seven players who were named National Player of the Year.

In 1980, his dream came true and remains a thrill to this day. The winner of more games than the first seven FSU coaches combined, he has been an NCAA Tournament participant for 40 consecutive years, counting his last two seasons as an assistant. Mike has pulled on the FSU uniform in Omaha for 18 of the program’s 22 trips as either a player, assistant or head coach.

In January of 2015, the Martin Family, longtime supporters of Tallahassee Memorial HealthCare’s children’s center and newborn intensive care unit, were honored as the children’s playroom at TMH was named the “Mike Martin Family Playroom.”

A 1966 graduate of Florida State after having spent his first two years of college playing baseball at Wingate Junior College (now Wingate University), Mike earned his master’s degree from the Tallahassee school in 1971. He and his wife, Carol, have three children: Mary Beth, Melanie and Mike, Jr., the latter of whom is entering his 21st season as an assistant coach to his father. Mike and Carol also have four grandchildren.