Our June 2022 newsletter includes an excellent feature about NCSHOF member Marion Kirby, one of our state’s top high school football coaches who helped develop Greensboro Page into a state power.  Our “Did You Know?” features touches on other NCSHOF members who achieved greatness in a variety of different ways in the realm of high school athletics. And the positive feedback for the NCSHOF’s Student-Athlete Program keeps coming in. We hope you enjoy! 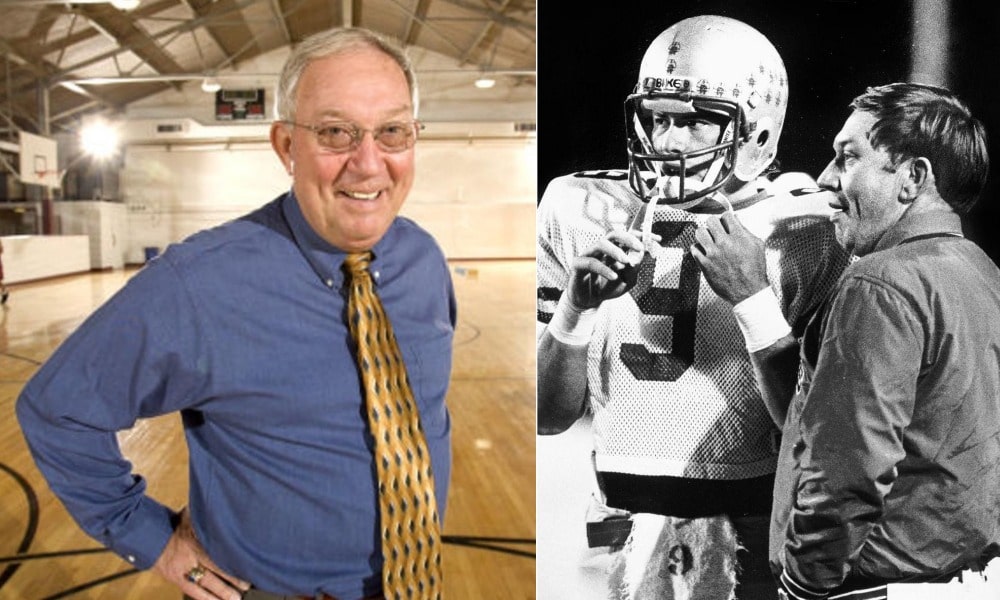 The numbers are nothing if not eye-popping.

During the 23 years that Marion Kirby coached football at Page High School in Greensboro, the Pirates had a record of 215-51-5 – which clocks in at a phenomenal winning percentage of 79.6. Along the way Page won three North Carolina High School Athletic Association state 4-A titles outright in 1980, ’83 and ’85 and shared another in 1984.

Oh, and Kirby, just four years removed from graduating from Lenoir-Rhyne, had similar success in his first stint as a head coach at Holmes High in Edenton, winning three conference titles and posting a record of 59-14-3 in his seven years at the helm.

The measures of that success, though, are the players Kirby coached and the lives he touched.

Players like Haywood Jeffires, a wide receiver who went on to star at N.C. State and made three Pro Bowls while playing for the Houston Oilers. Jeffires, who played on the 1983 state championship team at Page, joined Kirby in the North Carolina Sports Hall of Fame in 2016.

“Coach Kirby and me, man, it was father-and-son all over again,” Jeffires told the Greensboro News & Record prior to his induction. “He stayed on my case in high school, and I love him for it. … We were meant for this, meant to be together. All these years and we still can’t get away from each other.”

And players like Stafford Moser, a wide receiver who along with quarterback Todd Ellis, the state’s first 3,000-yard passer, led Page to two of those state championships.

“Coaches can make such an impact on a young person’s life,” Moser tweeted in 2020. “Blessed to have coaches develop me as a person and not just an athlete. In honor of #NationalCoachesDay, I want to recognize Coach Marion Kirby as one of the best. To this day I have so much respect and love for him!”

Former High Point Central coach Richard Kemp, who played with Kirby at Lenoir-Rhyne, was always impressed by the ability of his long-time friend to adjust and put his players in position to succeed. He told Wilt Browning of the Greensboro News & Record in 1990 that Kirby didn’t play favorites.

“Coach Kirby in a social setting is mild-mannered and soft-spoken,” Kemp said. “He seems almost shy. But that’s not the way he seems to his players. He has rules and regulations and a belief in what a football player ought to be when it comes to discipline and commitment.

“Nobody gets preferential treatment at Page. He runs a tight ship. But the least (talented) of his kids knows he has as much respect from Coach Kirby as the best of them. We all try to do that, but Kirby does it.”

Kirby grew up in Hickory, North Carolina, and his next door neighbor was legendary Lenoir-Rhyne and East Carolina football coach Clarence Stasavich, who was inducted into the NCSHOF himself in 1970. He was a life-long mentor to Kirby, who kicked the winning field goal when the Bears beat Humboldt State 15-14 to win the NAIA national title in 1960.

“I was afraid if I didn’t make that field goal, I might not have a ride on the plane home,” Kirby tells people in his typical self-deprecating way.  “I was the guy who had missed the two extra points that put us behind in the first place.”

Kirby left Page in 1973, but soon took a job at Greensboro College to build its football program from scratch. He didn’t have the same kind of success there, although GC rebounded from an 0-10 start to post a five-year record of 16-33, with .500 seasons in his last two years as head coach.

“We were at least able to reach the point where we weren’t everybody’s favorite homecoming opponent,” Kirby told the News & Record when he resigned in 2002. He spent the next five years as the athletic director at Guilford College.

When he left the high school ranks, Kirby said he came to Page to “see if I could create something.” And no one would deny that mission was accomplished.  He also helped other coaches by serving for many years with the North Carolina Coaches Association, whose offices are in Greensboro.

“It has been a marvelous journey,” Kirby said. “You can look at football as getting ready for a battle, and perhaps we’ve won more than our share of them.”

North Carolina has a wonderful tradition in a whole variety of sports, and that is certainly reflected in the membership in the North Carolina Sports Hall of Fame.

The tradition includes more than a century of great high school athletics, and as a result coaches, administrators, officials, and media associated with high school sports are all part of the NCSHOF.

Marion Kirby, this month’s featured NCSHOF member, is one of more than 30 members of the NCHSOF who are also members of the North Carolina High School Athletic Association Hall of Fame, which started in 1987 to recognize the best in high school sports in our state.  The three charter members of the NCHSAA Hall, legendary coaches and administrators Leon Brogden (inducted 1970), Bob Jamieson (1990) and Dave Harris (1993), are all members of the NCSHOF. 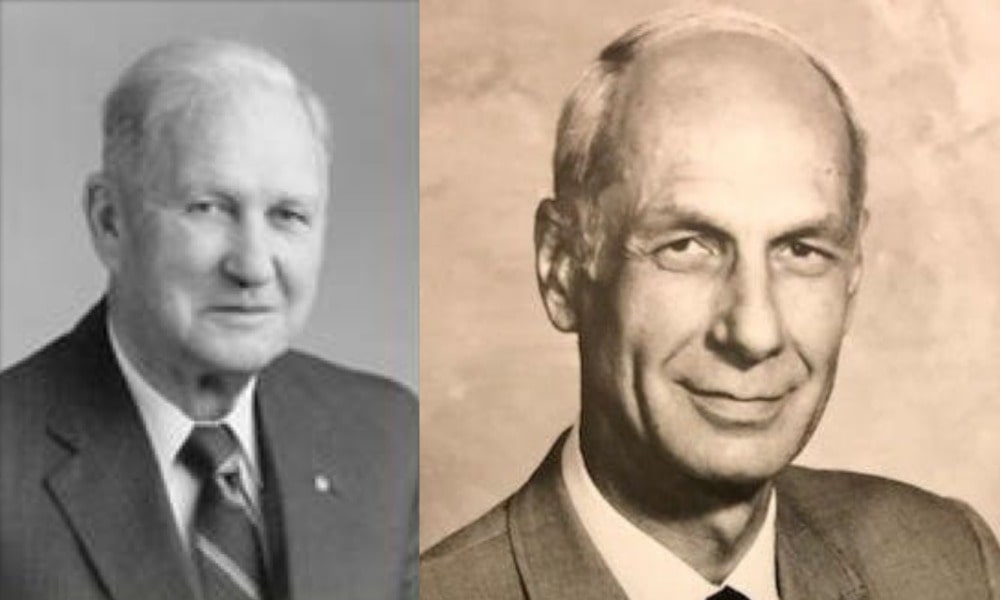 Three of the individuals who guided the NCHSAA for many years as executive directors are in the NCSHOF, including Hap Perry (1992), Simon Terrell (2006) and Charlie Adams (2006).

A whole host of great high school coaches in several different sports are enshrined in the NCSHOF, including George Whitfield (2005), one of the state’s best in baseball who has also served as a long-time member of the NCSHOF Board of Directors.  Mac Morris, a 2021 NCHSOF inductee, coached basketball at Greensboro Page for years while Kirby was leading the football team there to great heights.

Tom Suiter, one of this year’s inductees into the NCSHOF with a fabulous career in sports media, joins media giants Mary Garber (1996) and Tim Stevens (2021), who made their marks covering prep sports.

This is just a quick sample of many of the greats from high school athletics recognized by the North Carolina Sports Hall of Fame. 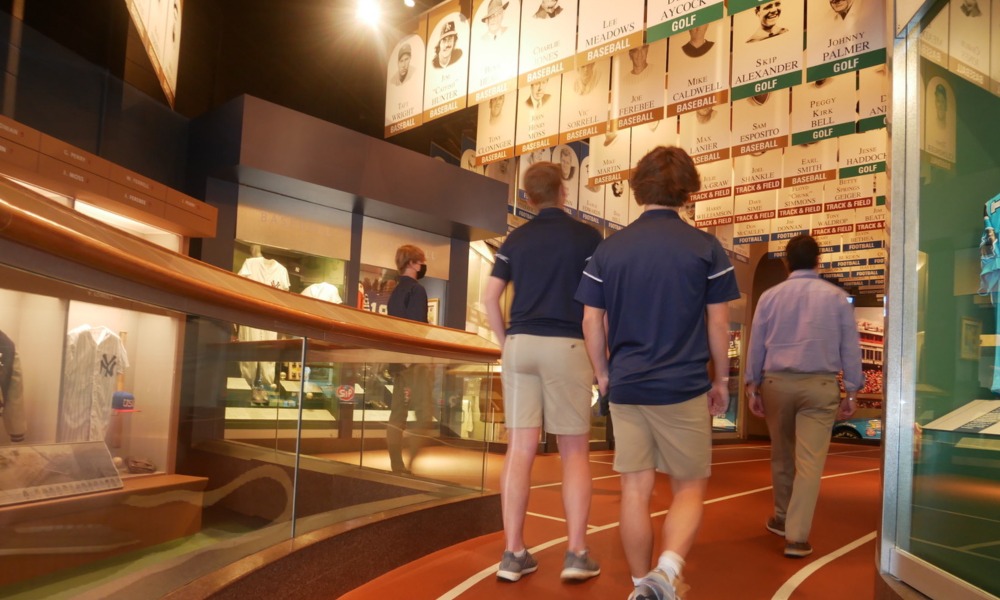 The Student-Athlete Program of the North Carolina Sports Hall of Fame was once again an integral part of the most recent induction ceremonies.

There were over 80 student-athletes plus chaperones in attendance at the banquet and then most of those participated in the special student-athlete seminar the following morning at the North Carolina Museum of History. There were also eight schools whose student-athletes were part of the activities virtually. 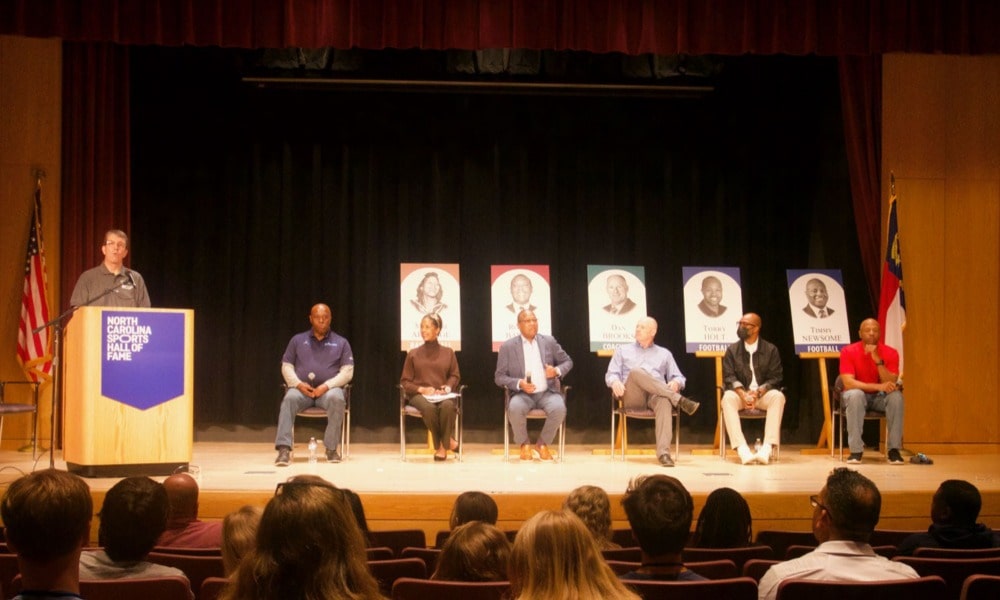 Each team attending the event in person had a sponsor which defrayed all the costs accompanied with travel, lodging and the like. And almost immediately after the event, the NCSHOF received some very positive responses to the weekend, and here is just a sample:

Rico Quispe, chaperone for Croatan High School in Carteret County, said this:  “I just wanted to express our gratitude once again for the invitation to such an amazing and inspirational banquet.  All of my athletes, including myself, were beyond impressed and inspired by such astonishing inductees to the class of 2022.  It truly was an honor and a privilege to witness such a special event.  Thank you for ensuring that every detail of our trip was well planned from start to finish – professionalism at its highest.”

All three Carteret County public high schools, including East Carteret, West Carteret and Croatan, were involved in the program.

Joe Burmester, executive director of Loaves and Fishes, a group based on Raleigh that sent a team to the banquet, responded this way: “We are very thankful for the opportunity to participate. The reports from both our adults and the kids were very positive, and the kids will spread the word to other students who will want to come next year! I will put the date on my calendar in hopes that I can avoid conflicts that prevented me from attending this year.  Thanks for the work you do, and for including Loaves and Fishes!”

And one chaperone was so excited that he sent an email just about an hour after the induction ceremony had ended. Anthony "Amp" Smith, chaperone for Wilkes Central High School, said, “Thank you so much for having us at the banquet tonight!!!!!!”

The NCSHOF will work to continue to expand these exciting opportunities for student-athletes and their coaches and chaperones to participate in this worthwhile program.