STATE HAS CEMENTED ITSELF AS VERSATILE HOME TO THE BIGGEST LEAGUES

For most of the 20th century, when you talked sports in North Carolina, the focus was almost always on amateurs – real amateurs. The majority of them were competing either for one of the 50 or so colleges and universities scattered across the state or whacking around one of the many golf courses that early on earned us the label of Golf State USA.

There were two exceptions. Minor league professional baseball was alive and well – indeed, thriving – across North Carolina from the early 1900s, and in Pinehurst the now-defunct North & South Open golf tournament was part of the state's sports fabric dating back to the early 1900s as well.

Coming out of World War II, however, the seeds of change were being scattered all over as college competition began going national in scope and television made it possible for major league sports of all kinds to be seen in North Carolina.

Perhaps the biggest change immediately after the war was the demise of minor league baseball. In 1948 and 1949, there were more than 40 professional minor league teams in seven or eight different leagues in our state alone. A decade later, most of them were gone or going fast. Television was blamed for virtually killing the minors, for now you could see the big leaguers play on TV, and soon cable would bring you an entire season of the Atlanta Braves, among others. 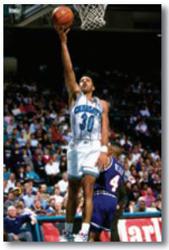 Almost as suddenly as minor league baseball disappeared, however, another professional sport appeared: stock car racing. The late Bill France and his cronies, who had been raising dust over tracks in Charlotte and Greensboro and wherever else they could draw a crowd, organized themselves into the National Association For Stock Car Auto Racing. By the last quarter of the century, NASCAR was a household name in sports bars and living rooms across the nation, challenging the Indianapolis 500 and open-wheel racing for popularity among racing buffs.

As the postwar sports boom began, major league golf remained a fixture in North Carolina, despite the demise of the North & South Open. The Greater Greensboro Open, which had been launched in 1938, continued as a regular PGA Tour stop and grew into what today is the Wyndham Championship. Asheville, Wilmington, Durham and Charlotte had PGA Tour events as well, though in fits and starts, during and after World War II, and Pinehurst was host to the Ryder Cup matches in 1951. Then the Tour returned to Charlotte to stay with its prestigious Wells Fargo Championship, giving the state two major PGA Tour events as the 21st century dawned.

Additionally, professional golf for years has had an off-and-on presence in the state via LPGA and Senior PGA Tour events, and the state has been host to a number of golf's major championships. The 1974 PGA was played at Tanglewood, near Winston-Salem, and Pinehurst No. 2 and Pine Needles each has been the scene of multiple U.S. Opens for men and women. 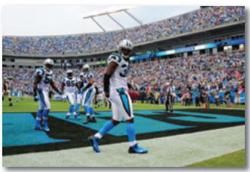 The Carolina Panthers, here celebrating a defensive touchdown, reached the Super Bowl in 2004.

Major league football, basketball and baseball remained elusive for the state until late in the century, however. Basketball gave it a try in the 1970s with the Carolina Cougars of the short-lived ABA, but it didn't stick.

It was left to some visionaries and risk-takers in the growing Charlotte metropolis to finally break through. First it was basketball with the Hornets of the NBA. Though they eventually fell on hard times and left for greener pastures, they were replaced a few years later by the Bobcats, who are now aiming for higher ground in the NBA under the ownership of the legendary Michael Jordan.

The state's biggest coup came thanks to the vision and enterprise of a former NFL player and highly successful businessman, Jerry Richardson. He did what few thought he could pull off – he brought an NFL franchise to Charlotte. With the full support of Charlotte's mushrooming financial empire, the Richardson group built (and owns) a state-of-the-art, 74,000-seat stadium and has successfully sustained the team since 1995, reaching the Super Bowl once (a 32-29 loss to New England in 2003).

A success story rivaling that of Charlotte's NFL franchise quest was Raleigh's entrance into the major league hockey world in the late 1990s. When the NHL’s Hartford Whalers owner was casting about for a place to move, local interests in Raleigh stepped up with the answer. Though their under-construction arena was not immediately available, their concerted effort persuaded the Whalers ownership to play in the Greensboro Coliseum for two seasons while getting the Entertainment and Sports Arena, later called the RBC Center and now named PNC Arena, ready. 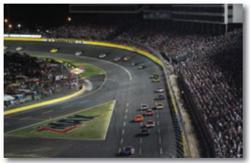 For three racing days each year, Charlotte Motor Speedway boasts one of the largest populations in the state.

The move proved to be a solid decision, and NHL hockey appears to be firmly entrenched in North Carolina, complete with an astonishing Stanley Cup (2006) adorning its trophy case. It is a dream come true for hockey fans, which earlier had enjoyed off-and-on eras of minor league professional hockey in Greensboro, Charlotte and Winston-Salem.

Major league baseball, however, continues to elude North Carolina, even though it is the largest state in the nation without a team and has metropolitan areas as large or larger than several existing major league franchises. Greensboro and Winston-Salem made a run at a major league baseball team late in the century, but it went for naught when the community voted against funding a Piedmont Triad stadium in which to play.

Meantime, as rumblings continue about a possible new bid for a major league baseball team, Winston-Salem has established itself as a budding new venue for professional tennis. Its ATP World Tour Winston-Salem Open, launched in 2011, has been met with gratifying success and its future apparently firmly set. There is even hope of bringing the Davis Cup finals to the Triad, an event held in the state only once before, in Charlotte in 1971.

Irwin Smallwood is a retired writer and editor for the Greensboro News & Record and a member of the North Carolina Sports Hall of Fame. The media center at the Wyndham Championship is named in his honor.