The Perfect State for Golf … Naturally

The 53,821 square miles of land occupied by the state of North Carolina were cobbled together millions of years ago in Paleozoic times – the land folding, contracting and eroding, the seas receding into a geographical structure unique on the Eastern Seaboard.

Today in North Carolina along the Atlantic Ocean is a chain of barrier islands, sandy beaches and windswept dunes forming the coastal region. Further inland is a vast plateau comprising the Sandhills and the Piedmont – vibrant cities and commerce and swift-moving streams coursing toward the coast. And to the west are the rolling hills and the dramatic cliffs and slopes of the mountains.

“It’s almost like you can get a taste of the entire country in this one state,” says Tom Fazio, the noted golf architect who moved to Hendersonville in 1987 and works from his main office located on Main Street. “You’ve got a little bit of everything ranging from the mountains to Pinehurst to the coast. In other areas of the country, you have to create features. In North Carolina, they come naturally.”

The state has been the scene of many noted golf competitions and has spawned numerous outstanding golfers, and the N.C. Sports Hall of Fame has 20 inductees who made their mark in golf. The sport is a prime economic engine as well, generating an estimated $5.3 billion annually in the last report compiled by the North Carolina Golf Marketing Alliance. 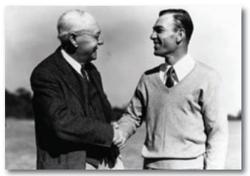 Ben Hogan (right) was a great admirer of Pinehurst No. 2, the masterpiece designed by Donald Ross (left).

Pinehurst was the first golf resort in the nation, sprouting from the barren Sandhills of Moore County in the late 1800s and offering four golf courses by 1919, and every city and most mid-size towns in North Carolina have at least one golf course designed by the noted Scottish architect Donald Ross.

Others came to North Carolina and spread their wings – including Arnold Palmer, who came from Pennsylvania to play collegiately at Wake Forest, and Peggy Kirk Bell, who grew up in Ohio and has become a giant in golf teaching and resort circles at her family’s Pine Needles Lodge & Golf Club in Southern Pines.

Pinehurst was the site of old North and South Open, an event considered in the first half of the 20th century as one of the “major championships” in golf in that era and the site of Ben Hogan’s first professional win in 1940. The North and South Amateur lists golfers the ilk of Patton, Ward, Jack Nicklaus, Bill Campbell and Curtis Strange on its championship plaque. Pinehurst was the venue for the 1936 PGA Championship (won by Denny Shute), the 1951 Ryder Cup Matches (won easily by the U.S. over Great Britain and Ireland) and one of the most famous shots in golf, that 20-foot putt Payne Stewart made to win the 1999 U.S. Open.

Greensboro has a rich tradition in professional golf as the Greater Greensboro Open and its offspring (known today as the Wyndham Championship) have enjoyed a date on the PGA Tour calendar since 1938. Sam Snead won eight times in Greensboro, and a young Spaniard named Seve Ballesteros burst onto the scene with a victory in 1978.

Charlotte’s Quail Hollow Club was the site of the Kemper Open on the pro tour from 1970-79 and since 2003 has been the venue for one of the modern era’s most prestigious events, with Tiger Woods, Rory McIlroy and Vijay Singh among winners at the Tour’s annual May visit to the Queen City, known today as the Wells Fargo Championship. Quail Hollow also will host the 2017 PGA Championship.

The state now has its sights set on an unprecedented staging of the U.S. Open and Women’s Open on backto-back weeks at Pinehurst No. 2 in June 2014. Making the men’s competition even more interesting is that yet another Tar Heel native, Raleigh’s Webb Simpson, is the incumbent champion, having collected the 2012 title at the Olympic Club. Where golf and North Carolina are concerned, the story pipeline never runs dry.

Lee Pace has written extensively about golf in North Carolina for nearly three decades. His most recent book is The Golden Age of Pinehurst—the Story of the Rebirth of No. 2.