Where the Rubber Met the Road 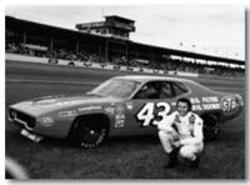 In the 1970s and 1980s, Randleman native Richard Petty was the key driver in turning stock car racing into a national pastime.

When it comes to stock car racing, the place to be is North Carolina. This state is THE central story of the beginning, growth and popularity of the sport. Here, among other reasons, is why:

Automobile racing was popular in North Carolina in the pre-World War II years with organized races at fairground tracks in Greensboro, High Point, Salisbury and Charlotte. After the war, North Carolina was a hotbed of auto racing. Moonshine haulers who polished their racing skills against federal revenue collectors out of the Tar Heel foothills in “modified” Fords and Chevrolets were among the top performers in the early days of the sport. They were daring and accomplished drivers and mechanics ready to compete on race tracks.

When Big Bill France muscled others out of the way to organize stock car racing, he used lessons he learned as a race car driver on ovals such as Bowman Gray Stadium in Winston-Salem and North Wilkesboro as well as the fairground tracks around North Carolina.

What today is called the Sprint Series replaced the modified series in 1949 as NASCAR’s major racing program. The first race of the Strictly Stock Car Series was held in Charlotte on June 19, 1949. The next year it was renamed Grand National Series. At that time, modified meant the souped-up cars in the fashion of the whiskey runners.

From racing’s lowly beginning until today, action on the tracks draws the fans, and the top performers become full-fledged celebrities. Those in the N.C. Sports Hall of Fame prove the point.

Lee Petty was an early star, winning NASCAR championships in 1954, 1958 and 1959. The man from Level Cross won 54 major races, including the very first Daytona 500 in 1959. His son Richard’s career was even more spectacular. Most racing followers agree that Richard Petty is the greatest ambassador ever for the sport of stock car racing. Petty won 200 races and seven championships of NASCAR’s premier series. He may well be the world leader in signing autographs and remains to this day the “king” of stock car racing.

Ned and Dale Jarrett of Hickory are another fatherson team in the N.C. Sports Hall of fame. Ned won two NASCAR championships (1961 and 1965) and compiled 50 wins in a relatively short driving career and today is a noted radio and TV racing broadcaster. Son Dale won 33 major races, including the Daytona 500 three times. He was champion in 1999. He is also now a racing broadcaster.

Dale Earnhardt is the only other driver to equal Richard Petty’s number of seven championships. He earned the “Intimidator” moniker for his aggressive driving style. His career soared after he joined Richard Childress’ racing team. Together they won six NASCAR championships. Childress is approaching 20 NASCAR championships as he continues his successful team operation out of Welcome.

Junior Johnson burst onto the NASCAR scene in 1955. He gave no quarter and won 50 races in 11 years before becoming one of the sport’s most successful car and team owners. Two of his drivers, Cale Yarborough and Darrell Waltrip, won three championships each.

Humpy Wheeler is regarded by many as the greatest racing promoter ever. He drew fans to Charlotte Motor Speedway with pre-race events such as New York cab drivers competing against each other on the super-speedway.

Just how important has the sport been in our state? In recognition of the state’s historic and present day impact on auto racing, the North Carolina General Assembly in 2011 adopted stock car racing as the state sport.

Nat Walker is a former reporter and city/state editor of the Greensboro Daily News and a former director of public relations of R.J. Reynolds Sports Marketing. He is the author of two books on stock car racing.