DOZENS WITH TIES TO NORTH CAROLINA HAVE SHONE IN GAMES 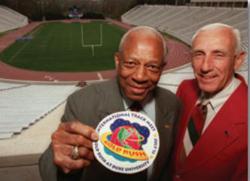 Dr. LeRoy Walker (left) and Al Buehler were longtime contributors to the Olympic efforts of the United States.

More than two dozen members of the North Carolina Sports Hall of Fame have represented their country at the apex of international sports, the Olympics.

Most of them competed in one of two sports. The first is track and field (also called athletics), the core sport of the Olympics. Harry Williamson was the path-breaker. A native of High Point and a graduate of the University of North Carolina at Chapel Hill, Williamson finished sixth in the 800-meters in the 1936 Berlin games.

Floyd “Chunk” Simmons represented the state when the games resumed in 1948. The Charlotte native, Tar Heel student and combat veteran captured decathlon bronze in the 1948 and 1952 games.

Shankle’s Duke teammate, Dave Sime, was a dominant sprinter in 1956 but missed those games due to injury. He made the U.S. team in 1960 and narrowly missed gold in the 100 meters, losing in a photo finish.

Later in the games, it appeared that Sime’s long quest had come to fruition when he anchored the U.S. team to an apparent win in the 4x100-meter relay. But the team was disqualified for an earlier, illegal baton pass. Also in the 1960 games, Tar Heel alum Jim Beatty finished ninth in the 5,000 meters.

Sime’s near miss was duplicated 16 years later, when Raeford’s Kathy McMillan garnered a silver medal in the long jump, missing gold by a scant two inches after a longer jump was ruled a foul.

Three Triangle track coaches have made Olympic impacts. Longtime Duke coach Al Buehler was the team manager in 1972, 1984 and 1988, while St. Augustine’s coach George Williams was head coach in 2004.

Basketball was introduced to the Olympics in 1936. Every U.S. men’s team since 1964 has had at least one player who played at a North Carolina college. And eight members of the Hall have played for the United States. New Bern’s Walt Bellamy, who played collegiately at Indiana, was a member of the legendary 1960 team, which won all of its games by an average score of 102-59.

Duke’s Jeff Mullins played on the 1964 gold medal team, while North Carolina’s Bobby Jones and N.C. State’s Tommy Burleson played on the 1972 team that lost the final game to the Soviet Union.

That unexpected and controversial loss was redeemed four years later by a team coached by the legendary Dean Smith. That goldmedal team included six players from North Carolina schools, including Tar Heels Phil Ford and Walter Davis. Ford averaged 11 points and nine assists per game in those Olympics.

Tar Heel great Michael Jordan made his first Olympic appearance in 1984, helping the U.S. to another gold medal. The U.S. failed to duplicate that accomplishment in 1988, the last time the country sent a team of collegians to the games. NBA players became eligible in 1992 and Jordan keyed the famous Dream Team to gold. 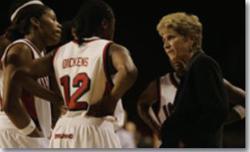 The U.S. repeated in 1996 and 2000 but failed to win gold in 2004. Duke coach Mike Krzyzewski was tasked with bringing cohesion to the NBA players who populated the Olympic roster. Krzyzewski coached the U.S. to gold in 2008 and 2012. Smith and Krzyzewski aren’t the only coaches from our state to win gold. N.C. State’s Kay Yow helmed the 1988 U.S. women’s team to victory.

Other sports have representation in the N.C. Sports Hall of Fame. Freestyle swimmer Steve Rerych won two gold medals in the 1968 games, both in relays. Backstroke specialist Sue Walsh missed the 1980 games, unfortunately, due to the U.S.’s boycott.

Former East Carolina basketball standout Sam Jones transitioned to team handball and played for the U.S. in the 1984, 1988 and 1992 games.

Soccer great Anson Dorrance coached the U.S. Women’s World Cup team but resigned as national coach prior to the introduction of women’s soccer to the Olympics in 1996. His Tar Heel players have dominated the U.S. team since then, however, including current Duke assistant coach Carla Overbeck, who won gold in 1996 and silver in 2000.

Jim Sumner is a longtime writer and sports historian who has served readers of various North Carolina publications for decades. He is based in Raleigh.