We are the Champions

YOU NAME IT AND OUR TEAMS HAVE WON IT

Lennie Rosenbluth starred on the Tar Heel team that won the 1957 national title.

Memories are made of this … On March 23, 1957, folks in North Carolina huddled around their radios, listening intently as the University of North Carolina Tar Heels played the Kansas Jayhawks for the NCAA basketball championship.

Listeners collapsed from the tension, then celebrated. The Tar Heels had completed a 32-0 season, cementing the sport as the most popular in the state and giving it a national championship.

It wasn’t the first for our state – the Wake Forest baseball team accomplished that in 1955 – but it was the most important because it burst the dam for a wave of national championships that continue to this day.

Professionally, the Carolina Hurricanes brought the Stanley Cup to the state in 2006. And in NASCAR, which rivals college hoops in popularity, Richard Petty (Level Cross) and Dale Earnhardt (Kannapolis) won seven titles each. Yes, the drivers made it happen, but it was the teams and pit crews that got the cars ready. 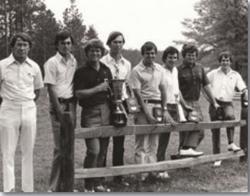 It’s impossible to list them all, but memories are made of this in basketball …

David Thompson and Tommy Burleson leading N.C. State to the championship in 1974 … Michael Jordan’s game-winner to give Tar Heel coach Dean Smith his first of two titles in 1982 … coach Jim Valvano of State’s “Cardiac Pack” racing around the court, looking for someone to hug after Lorenzo Charles’ dunk beat Houston in 1983 … Duke winning back-to-back titles in 1991-92, the first two for coach Mike Krzyzewski, who repeated in 2001 and 2010 … Roy Williams coaching North Carolina to titles in 2005 and 2009.

And for dominance, memories are made of this … North Carolina winning 21 of the first 31 NCAA women’s soccer titles, all under coach Anson Dorrance (he also won an AIAW title) … the remarkable record of coach George Williams at St. Augustine’s, whose teams have won 32 championships in Division II men’s and women’s indoor and outdoor track … the Methodist women’s golf team winning all 13 Division II tournaments that have been played, and the men’s team winning nine golf titles in 10 years.

And the state shows no signs of slowing down. Whenever they play for national championships in the future, more memories are going to be made by teams from the state of North Carolina.

The winningest coach in Division I history, Mike Krzyzewski has led Duke to four national titles since arriving in Durham in 1980.

Bill Hass worked in the sports department for the newspapers in Greensboro for 37 years. His coverage ran the gamut from community and youth sports to high schools, colleges and the pros. He is retired but still writes for the Greensboro Grasshoppers and for the ACC.