Sports fans specialize in nostalgia, but some memories have a more powerful draw than others. And nothing catapults an older ACC basketball fan back to his hoops-crazed childhood faster than a mention of the Dixie Classic.

Before hoops madness defined the month of March, basketball fans in North Carolina reserved their tournament fervor for December – when the Classic enlivened Reynolds Coliseum and made Raleigh into the holiday destination of sports fans across the state.

The tournament, the brainchild of N.C. State head coach Everett Case and former News & Observer sports editor Dick Herbert, was staged for the first time just weeks after Reynolds Coliseum opened in 1949. After 12 memorable years, it was shut down in 1961 after local players were implicated in a nationwide point-shaving scandal.

Each of the Dixie Classics featured the Big Four – Duke, North Carolina, N.C. State and Wake Forest – playing against four visiting teams invited by Case. And even though top-ranked outsiders came year after year to compete, no team from outside North Carolina ever won the Classic trophy.

Talk to any ACC basketball fan over the age of 65, and the odds are good that they once received Dixie Classic tickets in their Christmas stocking. For former Raleigh mayor and Wolfpack basketball player Smedes York, the tickets were a better incentive than Santa Claus. “My dad would get the tickets, and he would put them in our stockings,” York says. “If we were not behaving, he would say, ‘You’re not going to get those Dixie Classic tickets.’ ”

Former Governor Jim Hunt was in a quandary on the final day of the three-day tournament in 1958. His wife, Carolyn, was in labor with their first child, and Hunt had Dixie Classic tickets. He made sure Carolyn was okay, dashed over to Reynolds and watched a full slate of basketball. When the games were over, Hunt drove back to Rex just in time for his daughter’s birth.

“The quality of the teams and the play was of the highest order,” Hunt says. “The excitement and the cheering of the fans and getting into the spirit of it was as great as any event I’ve ever attended, of any kind, including political conventions.”

Former Dixie Classic players, including N.C. Sports Hall of Fame members Jack Murdock (Wake Forest) and Lou Pucillo (N.C. State), agree that at the height of the tournament they would rather have returned to campus with a Classic trophy than one from the ACC Tournament. Pucillo was one of the stars of the Wolfpack’s greatest Dixie Classic title in 1958, when they toppled powerhouses such as Michigan State with Jumpin’ Johnny Green and top-ranked Cincinnati with superstar Oscar Robertson.

After watching the Wolfpack knock off Michigan State in that memorable 1958 final, Louisville coach Peck Hickman left with a sixth-place finish and the realization that he had just witnessed something extraordinary. “They just about played the perfect basketball game,” Hickman said of N.C. State.

N.C. State relished the role of the Dixie Classic home team, and the Wolfpack’s dominance was absolute in the tournament’s early years as they took the first four titles. They would win three more, with Wake and Duke taking one each and North Carolina prevailing in three. No one would have predicted that the dramatic 1958 victory would be the Wolfpack’s last Dixie Classic title, or that less than three years later the tournament would be gone.

To this day, prominent sports figures such as Bucky Waters, a player at N.C. State and a former coach at Duke, are quick to register their disagreement with the decision – made by former University of North Carolina system president Bill Friday – to cancel the tournament as a response to the point-shaving scandal and the threats that were reportedly made to players who didn’t keep the score within the agreed-upon spread. But Friday believed that the scandal highlighted the overemphasis of college athletics in his purview, and by canceling the Dixie Classic he hoped to curb that excess. 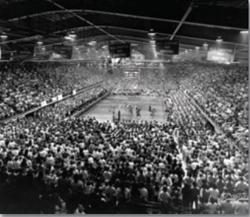 Reynolds Coliseum, which opened in 1949 as the largest arena in the Southeast, hosted the Dixie Classic

“The Dixie Classic, in a way, was a forerunner of what’s going on in American sports today,” said Friday, who died in October 2012 at the age of 92. “The NCAA is getting more serious about their sanctions, but the tragedy of it is that we have to do it at all, because we aren’t here to run an entertainment business, we’re here to run a good university.”

Despite the passion inspired by Dixie Classic recollections, most tournament adherents agree that the event couldn’t be the same today in this era of made-for-TV events like the Maui Invitational. For Classic fans like former Wake Forest coach Dave Odom, who was a boy during the Dixie Classic heyday, the memories endure.

Bethany Bradsher is the author of The Classic: How Everett Case and His Tournament Brought Big-Time Basketball to the South