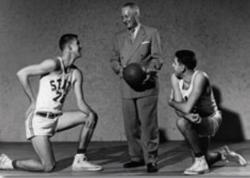 Everett Case understood the importance of marketing college basketball, which included taking photos like this with Cliff Hafer (left) and John Maglio.

Everett Case took the men’s basketball coaching job at N.C. State in the spring of 1946 without ever setting foot on campus. If the legendary Indiana high school coach had bothered to scout the area, he would have found that North Carolina was as deeply in love with college football as its southern neighbors. The state belonged to the likes of Wallace Wade, Charlie “Choo Choo” Justice and Peahead Walker. It was the golden age of football in the state of North Carolina.

Yet, in little more than a decade Case would transform North Carolina into a basketball crazy state. Football would still be popular, but Tobacco Road would be forever identified with the hardwood sport.

“People do not understand what a terrific promotional man he was, promoting his basketball team, the conference, showing everybody the right way of selling basketball,” his protégé, Vic Bubas, said.

Case didn’t bring big-time basketball to North Carolina – it was already here. North Carolina played in the national title game a few weeks before Case arrived in Raleigh. Hall of Famer John McClendon was winning championships at the North Carolina College in Durham (now NCCU) in the early 1940s. But for all that success, public interest was sporadic. Fans would get excited by great teams, but, except for Duke’s Indoor Stadium (as it was named then), which was almost never filled, facilities were tiny – yet wholly adequate.

That’s what Case changed almost overnight. He made basketball an event, introducing dozens of frills that we now take for granted. He started the first pep band in the South and filmed his games in color, which came in handy when he would later show highlights on the first television coaching show in the country. He introduced the now-familiar pre-game introductions, turning the lights down and spotlighting each starter as he was introduced. He hung a noise meter from the Reynolds Coliseum rafters – a long pole with a line of light bulbs that would light up as the noise reached a crescendo (only later would it be revealed that the noise meter was phony – the lights were controlled by a dial that a State official twisted at whim).  The fans ate it up.  And they were thrilled by the fast-paced tempo played by his Indiana imports. 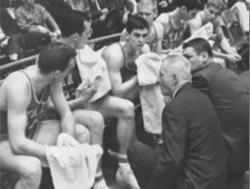 Case inherited a 6-12 team, but in his first season, his five newcomers won 26 games and dominated the league. After the Red Terrors, the school’s nickname at the time, edged North Carolina in Chapel Hill, there was so much enthusiasm for the rematch that fans packed themselves into tiny Walter Thompson Gym on the State campus. When the fire marshal closed the doors, fans smashed windows to continue pouring inside … forcing the cancellation of the game!

Case responded by calling Duke’s Eddie Cameron and convincing him to switch the Southern Conference Tournament from the 4,500-seat Raleigh Auditorium, which had hosted the event since 1932, to Duke’s 9,000- seat Indoor Stadium.

The championship game – where N.C. State again edged North Carolina – packed the seven-year-old facility. Afterward, Case introduced Tobacco Road fans to an old Indiana high school tradition – cutting down the nets. It’s believed to be the first time that was ever done after a collegiate championship.

Case would win a lot of championships in the next decade – nine conference titles in his first 10 years. He would redesign Reynolds Coliseum, turning it into the largest facility in the South. When it was finished in 1949, he used it to host the Dixie Classic – a holiday tournament that matched the Big Four North Carolina schools against four national powers. It would become the most popular sporting event in the state.

Case turned himself into an ambassador of the game. He traveled the back roads of North Carolina, speaking to civic groups, helping high schools raise money for modern gyms and occasionally stopping to give away a basketball or one of the hoops that he kept in his trunk of his Cadillac.

His success spurred his rivals to greater efforts. Duke, tired of losing championship games to Case, eventually hired Bubas, his right-hand man. Wake Forest turned to Bones McKinney, a former pro star and one of the most flamboyant figures in the game. North Carolina, galled by a 15-game losing streak to Case, hired celebrated coach Frank McGuire away from St. John’s after a Final Four run.

By 1956, McGuire had a team that was actually good enough to compete with Case’s Wolfpack and the rivalry drove basketball interest to new heights. By 1957, when North Carolina was putting together its undefeated national championship season, the Tar Heels found themselves deluged by interest in a way that the 1946 North Carolina team – that also made it to the title game – could have never imagined.

During North Carolina’s dramatic march to the title, the Tar Heels caught the attention of a Philadelphia television producer named C.F. Chesley. When he saw the drama and the intensity of the ACC Tournament, he quickly realized the potential for basketball on TV.
Chesley arranged for the telecast of North Carolina’s NCAA Tournament games. Almost the entire state was watching when the Tar Heels dueled Wilt Chamberlain and Kansas for three overtimes in the national championship game. By the time the buzzer sounded in Kansas City, the state of North Carolina was in a state of delirium and Chesley was inspired to start the nation’s first regional college basketball network.

When McGuire’s team returned in triumph, more than 15,000 fans were gathered at the Raleigh-Durham Airport to greet them. While it was McGuire’s team that was honored, it was – in a very real way – Case’s triumph, too. In 11 short years, he had changed the sports culture in North Carolina, installing basketball as king on Tobacco Road.

Al Featherston was born and raised on Tobacco Road and has covered the ACC for a variety of North Carolina newspapers since 1971. He’s the author of two books on ACC basketball, including Tobacco Road, a history of the state’s rivalries.