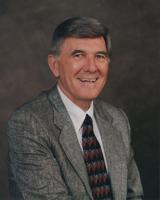 Paul Jones was one of the most successful high school basketball coaches in North Carolina history and a legend in the eastern part of the state. In a 38-year career at Grainger and Kinston high schools that began in 1957, his teams compiled a remarkable 662-274 record, winning consecutive North Carolina High School Athletic Association state 3-A basketball championships along the way and going an amazing 66-1 during that two-year stretch.

Paul was a mentor to so many young men during his illustrious career: He instilled direction, discipline, provided beliefs and values that shaped so many of their lives. He was a man who quietly taught young men the right way to play basketball in practice every day and on game night he let them play with the foundation that he had laid in practice, a foundation that, he was certain, would take over and bring success.

Forty-two of Paul’s players went on to play college basketball and four played in the NBA: Cedric “Cornbread” Maxwell (who led UNC Charlotte to a Final Four and won a pair of NBA titles with the Boston Celtics); Jerry Stackhouse (UNC), the late Charles Shackleford (NC State) and Tony Dawson (Florida State). His teams had a winning record against coaches the likes of the late Harvey Reid of Wilson Fike, and his teams defeated those with well-known players such as Bill Bunting, Phil Ford and the greatest player of all time, Michael Jordan, among others.

“Paul Jones was one of the finest basketball coaches the state of North Carolina has ever produced,” the late NCHSAA Executive Director Charlie Adams once was quoted as saying. “But more importantly, he was a gentleman, a wonderful person and a long-time friend.”

Paul was a native of Thomasville and attended East Carolina, where he was a member of both the basketball and baseball teams. He graduated from the Greenville school in 1955 and then served two years as an officer in the United States Air Force before launching his coaching career. He died in April of 2009. He’d been married to his high school sweetheart and No. 1 fan, Betty for 49 years until her death in 2002. They were the proud parents of three successful children – daughters Kim and Trent – a son, P.J., and six grandchildren and three great grandchildren.