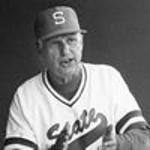 Sam Esposito came to N.C. State in the fall of 1966 and ushered in the modern era of Wolfpack baseball. In 21 years (1967-87) as head coach, Esposito never had a losing season, won four Atlantic Coast Conference championships — including three in a row from 1973-75 — guided the Wolfpack to the College World Series in 1968 in just his second year on the job, and twice was named ACC Coach of the Year. He coached 68 All-ACC players and seven All-Americans.

Twelve of his former players went on to play major league baseball, including four — Mike Caldwell, Tim Stoddard, Dan Plesac and Doug Strange — who played at least 10 years in the big leagues. Esposito finished his career at N.C. State with a 513-253 record.

A phenomenal three-sport athlete in his own rite, Esposito was the Chicago High School Player of the Year in football, basketball and baseball as a senior during the 1949-50 school year at Christian Fengler High School. Upon graduation, he attended Indiana University on a basketball scholarship and lettered with the Hoosiers in 1951-52. Esposito was selected a team captain on Indiana’s 1952-53 basketball team, which went on to win the national championship, but he signed a professional baseball contract with the Chicago White Sox and left Bloomington before the basketball season began.

Esposito played in one game for the White Sox in 1952, then spent the 1953 season in the minor leagues and was in the military service in 1954. He returned to the White Sox in 1955 and stayed in the big leagues through 1963. He spent all or parts of 10 seasons in the majors, all but 18 games of them with his hometown White Sox.

An exceptional defensive player, Esposito was a utility infielder and served as backup to future Hall of Fame infielders Luis Aparicio and Nellie Fox. Esposito appeared in 333 games at third base, 133 at shortstop, 41 at second base and four in the outfield. He was a member of the 1959 Go-Go White Sox, who won the American League pennant and played the Los Angeles Dodgers in the World Series.

Upon retirement as a player, Esposito returned to Indiana, where he completed his undergraduate and graduate degrees and also coached high school baseball. During this time, a friend introduced him to N.C. State basketball coach Norm Sloan, who was looking for an assistant basketball coach. It so turned out that the Wolfpack also needed a head baseball coach, so Esposito came to Raleigh in that dual capacity. He remained on Sloan’s staff through 1975 and was an assistant coach on the 1974 national championship squad.

After retiring as head coach of the baseball team in 1987, Esposito worked in administration at NC State on and off through 2003. In 1972, he was inducted into both the South Chicago Sports Hall of Fame and the Illinois Basketball Hall of Fame.