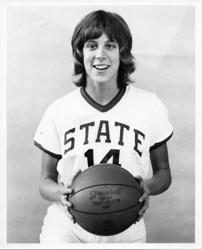 Being a great basketball player requires many tools. Oddly enough, for Susan Yow, they included shovels and a barrel. Those and her all-around skills led her to become an All-America player in 1975 at Elon as a junior and in 1976 at North Carolina State as a senior.

Growing up in the Guilford County town of Gibsonville as part of a sports-crazy family – she’s the fourth Yow to enter the Hall of Fame – Susan loved basketball at an early age. “I think God gave me an aptitude for basketball,” says Yow, currently the head women’s coach at Queens University in Charlotte.

In the winter, Yow and the neighborhood boys would shovel snow to clear the blacktop at the school and church, where they played pickup games. They’d build fires in barrels so each group waiting for the next game could stay warm. “The testing ground for me was the blacktop,” she says. “I played with the boys there. I could tell they thought I was pretty good.”

Yow went from “pretty good” against the boys to easily the best player against the girls. She credits her seventh-grade coach, Eddie Flinchum, with teaching her much about the game. And of course, she learned more from sisters Kay and Debbie, both of whom “had a huge impact on my life.” Kay, Debbie and their cousin Virgil Yow, longtime men’s basketball coach at High Point University, are previous inductees. “The unity of our family was sports,” says Susan, whose older brother, Ronnie, received a football scholarship to Clemson.

After a standout career at Gibsonville High School, Yow played under sister Kay all four years in college. In her senior year at N.C. State, the 5-foot-9 Yow averaged 19.4 points and 11.9 rebounds per game, while shooting 58 percent from the field and 83 percent from the free-throw line. She still holds the school record with 27 rebounds in a single game. At Elon, she ranks fifth all-time in rebounds per game with an 8.5 average.

But what she’s most proud of are her team’s accomplishments. “I tried to be a team player,” she says. Yow’s college teams combined for a record of 71-15, including a gaudy 52-8 in three seasons at Elon. She was on three AIAW state championship teams, two at Elon and one at N.C. State. After graduating from Elon, she became head coach at East Tennessee State and was later head coach at Drake, Kansas State and other schools. She also worked as an assistant coach with three WNBA teams.

In 1988, she served as assistant coach to Kay on the U.S. Women’s Olympic team, which won the gold medal in Seoul. “Basketball,” she says, “gave me a platform, the influence to be a role model.”