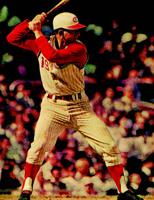 Tommy Helms had his baseball baptism in the tiny community of Leaksville (now Eden), where he served as the batboy for his father’s team in a mill league. “We had four major league players come out of there in the years after World War II,” he recalls. “Whitey Lockman, Ken Wood, Pete Whiseant and me. Must have been something in the water.”

By the time he reached high school, Helms was excelling in baseball and basketball at West Mecklenburg High School near Charlotte, where he received all-city honors in both sports. It was his performance on the diamond as a shortstop that earned him a professional contract.

“I was scouted by the Cubs, Indians, Senators and the Reds, and signed with Cincinnati,” Helms says. “They sent me to Palatka, Florida, Class D ball, the lowest rung on the minor league ladder. That’s where they started everybody back then.” Helms, who had just turned 18, needed the seasoning. He played for Palatka for two seasons and then began moving up the rungs of the minor leagues. In 1962, he was in Class A ball, on the Macon, Georgia, farm club; his double-play partner at second base was Pete Rose.

A year later Rose was in the big leagues, winning Rookie of the Year honors for Cincinnati, and a year after that, on September 23, 1964, Tommy Helms made his major league debut. Two years later, Helms, now targeted for second base, became a starter. But that meant moving Rose to a different position. “They moved Pete off second and put him at third to start the season,” Helms says. “But Pete didn’t like third and after about two weeks, we switched positions. It was unusual. I’d come up as a shortstop, then they moved me to second and now I was playing third. I’d never played third base.”

He joined several of his teammates on those all-star teams. The Reds had a talented group of youngsters reaching the big leagues in the mid-1960s: Rose, Tony Perez, Lee May, Gary Nolan, and a young catcher out of Oklahoma by the name of Johnny Bench. By the late 1960s, the Reds lineup was leading the league in offense and it had been dubbed “The Big Red Machine.”

The Reds were also one of the best defensive teams in baseball, and Helms, by this time back at second base (with Rose at third), led the way in the infield. He won Gold Gloves in 1970 and 1971, when the competition included players such as future Hall of Famers Bill Mazeroski and Joe Morgan (then with the Houston Astros). His 1971 performance included turning 130 double plays, which remains a Cincinnati club record for most double plays in one season by a second baseman.

Despite winning the National League pennant in 1970, the Reds decided, after a lackluster 1971 season, to shake up their lineup by adding more speed. Although he had just won his second Gold Glove and hit .258, the Reds included Helms in a blockbuster trade with Houston that involved eight players. Cincinnati acquired Morgan and four other players, but gave up the popular Helms and slugging first baseman Lee May.

Helms was the Astros’ starting second baseman for the next three years. He retired in 1977 with a career batting average of .269. Never considered a home run hitter, he still managed to hit homers off Hall of Famers Jim Bunning, Phil Niekro, Steve Carlton and Ferguson Jenkins. Helms also hit the first home run by a Red at Riverfront Stadium; it came in the second game at the new ballpark on July 1, 1970.

A few years after his retirement Helms was back in baseball, coaching for manager Don Zimmer on the staff of the Texas Rangers. His old team, the Reds, invited him to join their coaching staff in 1983, where he served as infield instructor and first base coach for seven years.

Baseball talent continues to run in the family. Tommy’s two sons, Ryan and Tommy Jr., both signed professional contracts and appeared in the minor leagues in the early 1990s.